Assignment 3: (Steps and) Stairways to heaven (and hell)

Stairways and steps have featured in photographs over the years from Alfred Stieglitz; Euegene Atget; André Kertész; Brassaï; Cartier-Bresson; DeCarava; and Stephen Shore to name just a few. Some have a deliberate psychological intent while others are found within a scene but still retain that dark mental component. There are transitions from one site, or from one state to another. Dreaming of stairs brings an interpretation of one’s mental state, where ascending indicates progression or development of self while descending illustrates a drop into the unknown. I sometimes dream of climbing dark unsafe staircases to an attic where horrors await, and others where the staircase, ascending or descending, becomes treacherously steep or rickety. These are less to do with nightmares than with understanding your own situation as perceived by your sub-conscious, but nevertheless the stairs are a critical element that indicates transition, or progress, or development. However just by typing up this assignment I’m reminded of how scared I was as a young child having to go upstairs to bed alone, and how my father tried to “cure” this (unsuccessfully) by forcing me to go up alone in the dark. That wasn’t a fear of the house of course, rather a fear of the unknown, or the future, but still only brought on by the dreaded transit of the staircase.

When we die, we may assume that we ascend a staircase to heaven, as illustrated in several Hollywood movies, such as “A Matter of Life and Death”, from where Led Zeppelin coined their “Stairway to Heaven” song and imagery. Generally speaking the ascent is understood to be a “good” thing whereas the descent is more fearful, but there are elements of the unknown in both scenarios, particularly where we cannot see what lies at the bottom or at the top.

Steps may also indicate status, where the lowly sit at the bottom whilst the entitled perch on top. The exceptionally lowly may not even have steps but squat on the ground while angels float above us, also free of steps but obviously superior.

The most striking photographic stairway images were shot in monochrome which removes colour and colour relationships as a distraction leaving texture, shapes, contrast and key to set the mood. I have chosen to examine stairways in monochrome, and have used a grainy effect both to enhance the textural quality and reference so-called “real” photography. My first set of images review a descent from what one may initially think of as “heaven”, down to what may be “hell” for some of us fortunate ones. 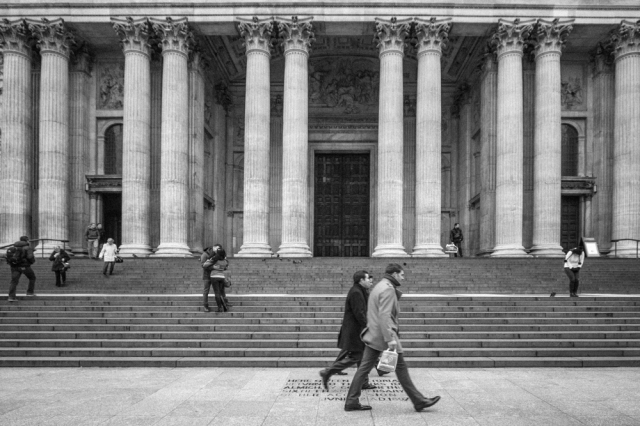 St Paul’s cathedral’s approach is an impressive array of steps that nowadays function as a stage for tourists, demonstrations, and a few religious events. For a newcomer the mystery is what is happening behind the locked doors at the top, but I can reveal that their soul can only be helped in a very small chapel to the left of the entrance, and damned if they can explore the rest of the cathedral for less than £15. I understand that they have expenses but that charge is a purely business transaction and not a spiritual tithe. In the recent anti-capitalist protests they sided very clearly with the capitalists of Paternoster Square, and their continued evasion behind the English establishment headed by Prince Charles puts them beyond contempt.  These steps are no stairway to heaven, they are an ascent to mendacity. God is not here, only the Devil’s cashiers. 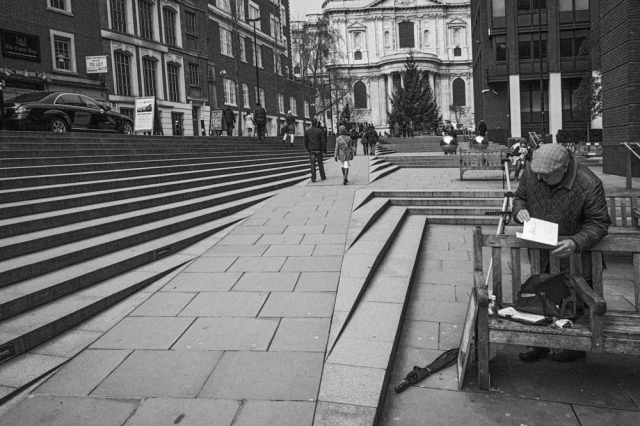 This southern approach to St Paul’s could be understood as subtly indicating that all is not as you expected. The scene almost appears to be two scenes badly stitched together, perhaps as homage to any number of paintings of heaven and hell over the years, which remain a popular subject. The illusion seems apt in this context, given my stated views of St Paul’s current standing. 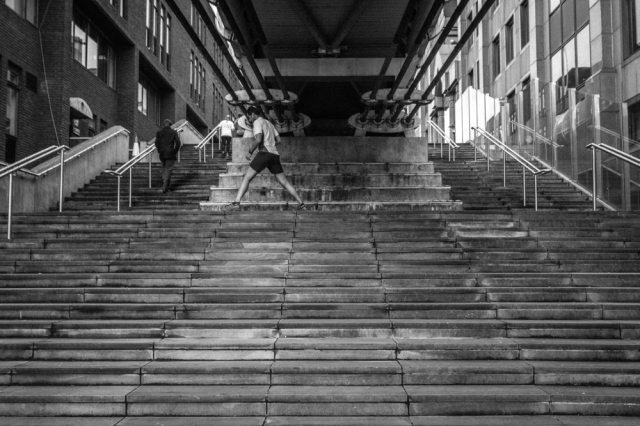 A symptom of the problem

Further descent shows a flight of steps routinely used by capitalists to exercise their bodies whilst their souls continue to atrophy. From this angle we cannot see the destination, only that the pathway is lined with shiny modern fittings built on filthy stones under a bridge that proudly displays its means of construction and support, as is the capitalist tendency. The bridge originally opened and then quickly closed when it was found to vibrate uncontrollably, threatening to hurl its customers over the side. Perhaps capitalism is also now vibrating out of control and revealing its potential to reward its founders whilst destroying its victims. 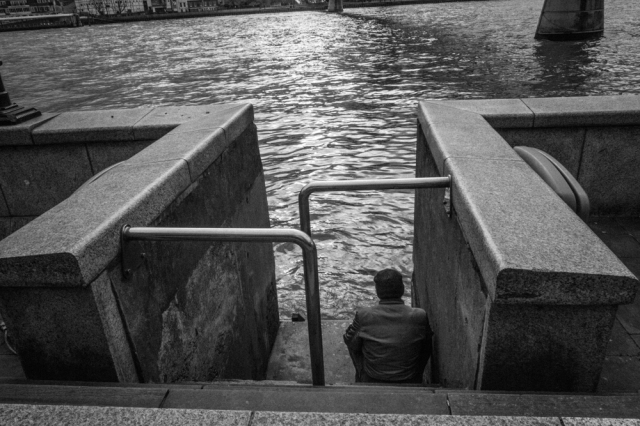 The last step on the descent from St Paul’s is at the river as may be expected. Here I found a young man cradling a bottle of cheap spirits, lost in thought as he gazed into the depths of the river, or perhaps into his soul. On one side of me were a group of elderly drinkers with whom I assume this man associated.  They were not gin ‘n’ tonic drinkers today, but cheap beer and spirits drinkers, the losers in the capitalist society. For this man the final step  may well have been to hell, but perhaps oblivion in the Thames is preferable to his current earthly hell.

The next few images are intended to look at other unconnected stairways for their photographic interest. 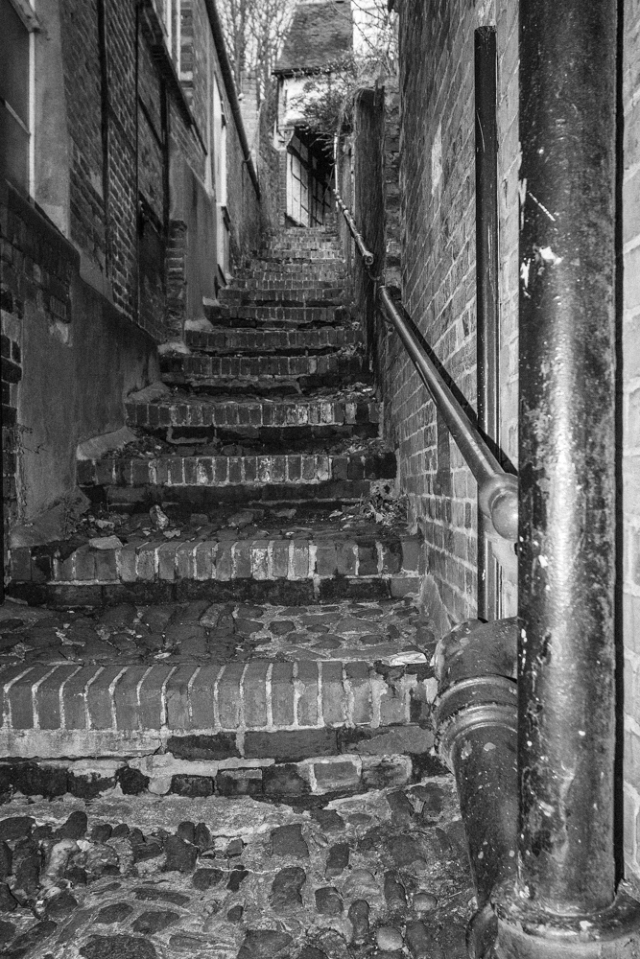 Things can only get better

We stand at the bottom of a fetid alleyway where pipes leak fluids into the ground and other unidentified pungent fluids discourage delay in moving on. The ascent is unknown, but on higher ground than the current aspect and therefore desirable. The white-painted wall above suggests a better place. 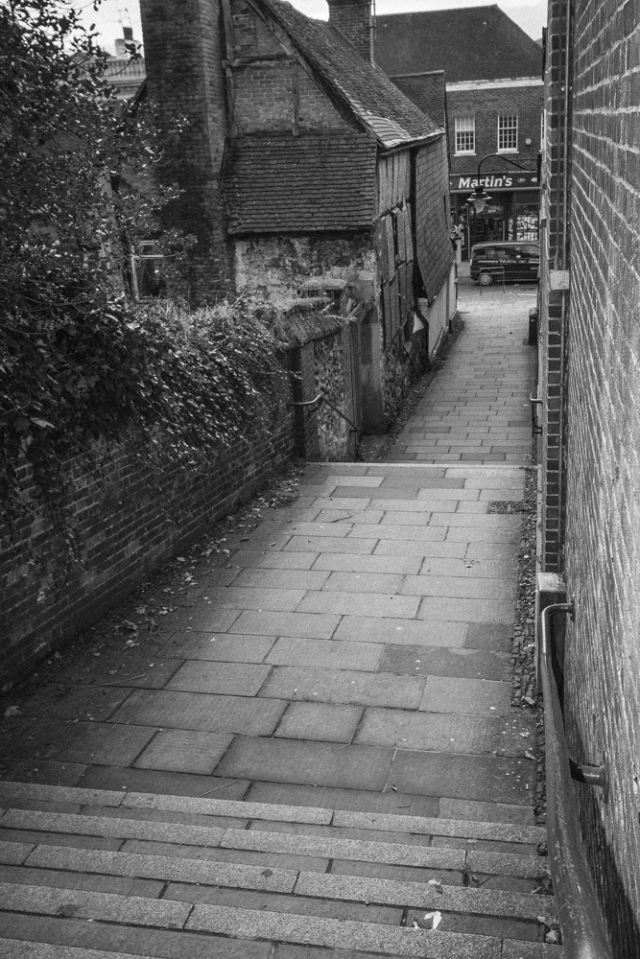 This descent also suggests a better place, depending on your outlook. There is life down there at least, and perhaps a warmly inviting Costas coffee shop (not Starbucks). The path back to civilisation is edged with speading foliage that drops its waste products on our path, but in the depths of winter a little neglect is both acceptable and not unattractive. 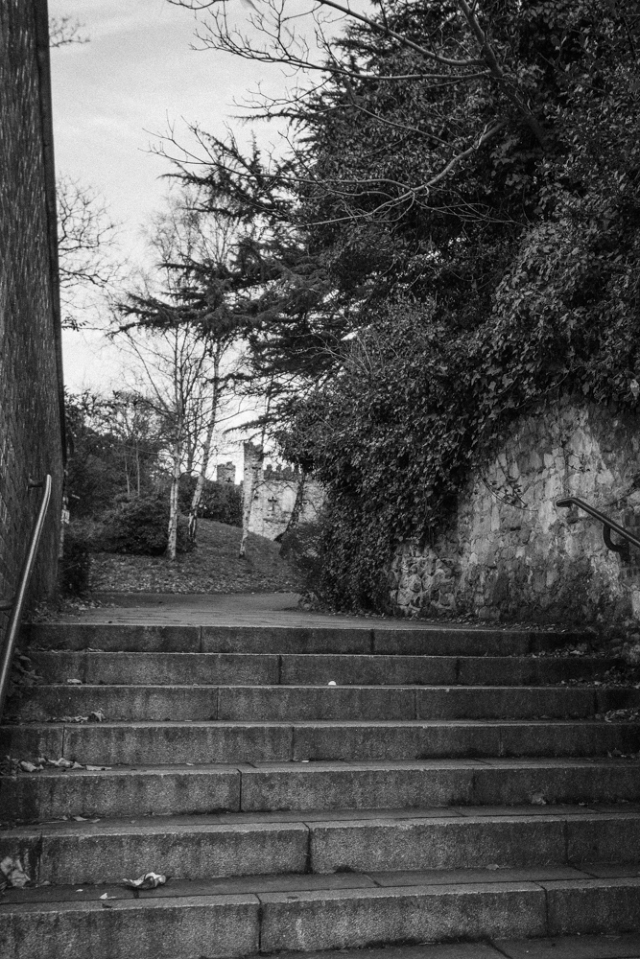 At the top of these steps is a castle that contained a working church, gone now but in its day a symbol of protection. Castles were usually built on higher ground, the more easy to defend against intruders. To the intruder the ascent was potentially deadly but for the refugee it would have been a welcome haven. 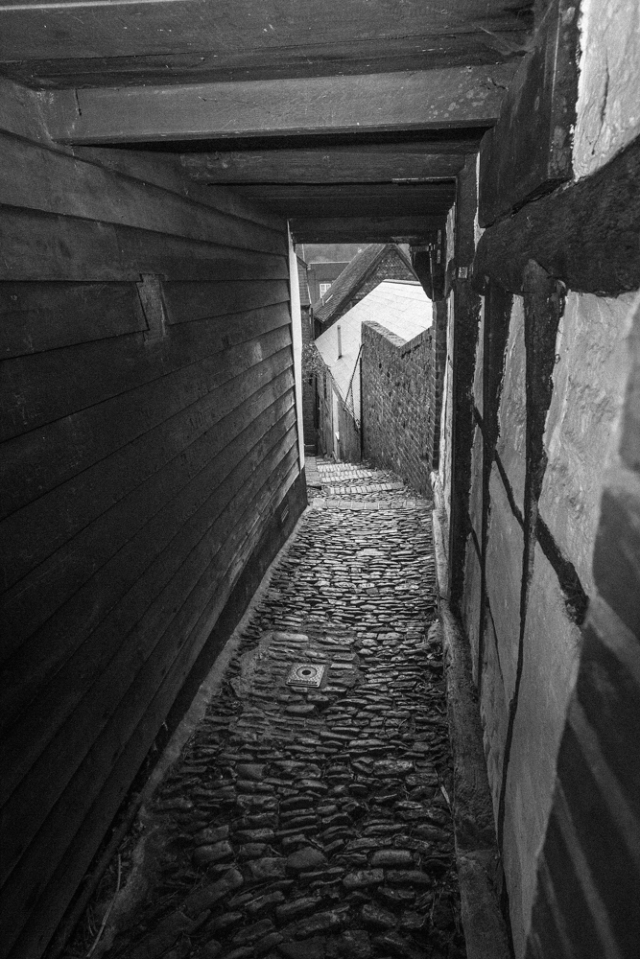 This descent is problematic to a citizen of the 21st century given the unfamiliarity of cobbles, wooden-beamed structures, narrow passage and unknown destination. There are no signs to prohibit passage, no gates, but the passage appears to be within someone’s private ownership and permission to transit is not clear.  The beams belong to a private house, not a hotel or pub, and cobbles are not usual. Should I risk the trespass? 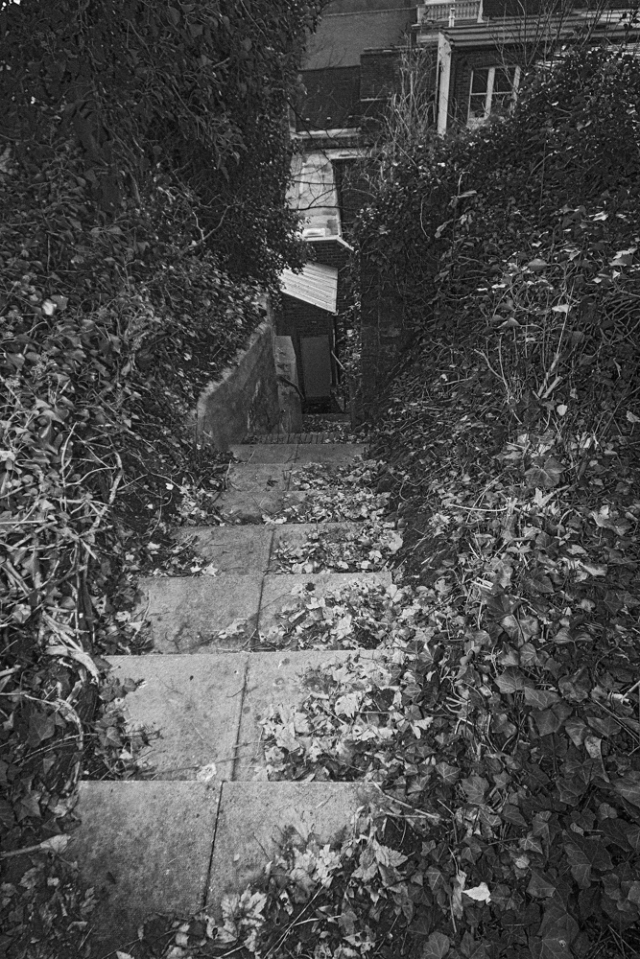 Another over-grown path with no signage prohibiting entry and no indication of the destination.  W Eugene Smith is one of the many photographers who influence me, particularly his use of chiaroscuro, as demonstrated by many painters such as Rembrandt, Caravaggio, Rubens. I used a flash to light the foreground but with the zoom manually set to the 105mm setting, even with the camera set to 12mm (18mm equivalent), so as to illuminate the centre of the path and lead the eye down to the tangle, gloom, and precipitous drop beyond. It’s the antithesis of Smith’s “Walk to Paradise Garden” in that Smith’s image promises hope and enlightenment whereas mine suggests uncertainty and peril. One could reflect that Smith’s image was produced after the second world war, and the national mood was positive, hopeful, promising, whereas mine is set as Britain is heading for a triple dip recession with the government promoting class warfare, fear, elitism, impoverishment, malice and depression. 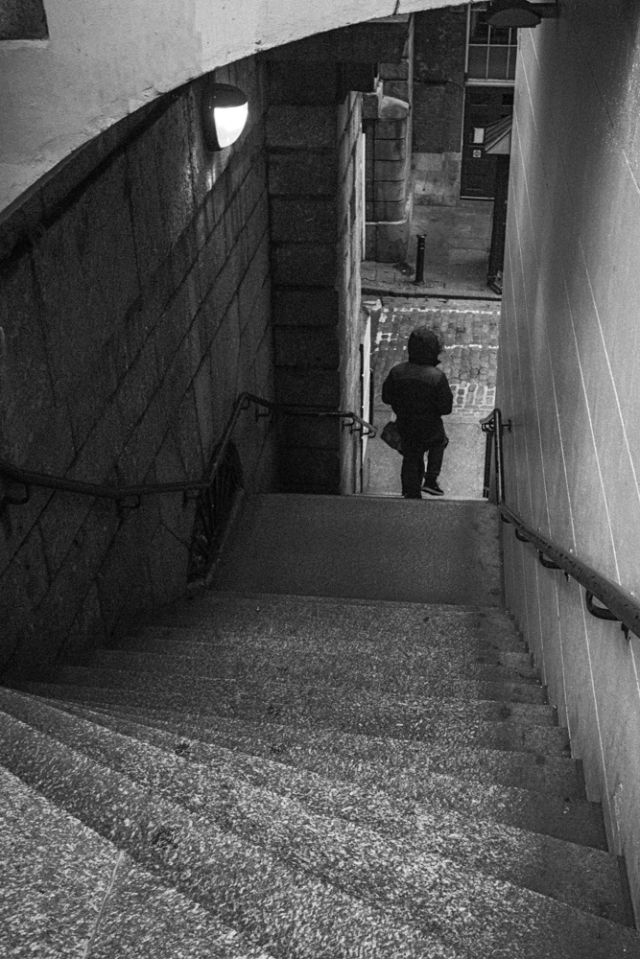 After many years of exploration of London I am familiar with these steps but the first few times I was deterred by the steepness of the descent coupled with the poor lighting and perceived slipperyness.  These are in fact a purely functional route off a bridge to a useful street below, but there is no sign or indication that this is the case.  The steps existed in Dickens’ times and a plaque at the bottom indicates that he also saw the threatening aspect and used them as the setting for the murder of Nancy in “Oliver Twist”, but the plaque is actually mistaken, Nancy being murdered elsewhere. Still, the steps do seem to be a good place for such violence, being secluded from passing traffic.

Flaneur for my own ailments; government and corporate hypocrisy; guitar stuff; the music business; home made videos featuring home made tunes played at home; a bit of golf; and of course photography. Specifically "art" photography (doesn't exist) and contemporary photography ( sadly does exist in all its grotesque reality).
View all posts by watlvry →
Gallery | This entry was posted in Assignment 3, Assignments. Bookmark the permalink.

1 Response to Assignment 3: (Steps and) Stairways to heaven (and hell)